With May being National Physical Fitness and Sports Month, it’s a great time to remind SoFHA patients about the importance of exercise to good health. Some of the most intriguing research yet underscoring this fact appeared recently online in Neurology, the medical journal of the American Academy of Neurology. In a study published March 23, 2016, it was found that older adults who had done regular, high-intensity exercise over the previous two decades had delayed “brain aging” by about 10 years – compared to those in another group who had done little or only light exercise over that same period. High intensity activities were defined as jogging, aerobics and calisthenics. 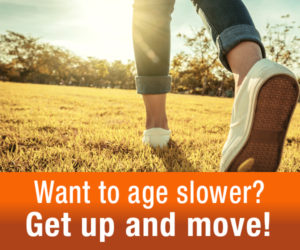 The findings involved 876 seniors who were asked how long and how often they had exercised in the prior two weeks. About seven years later, each participant in the study was tested for memory and thinking skills and given a brain MRI. This was followed up five years later with another round of memory and thinking tests. In short summary, when it came to the tests involving episodic memory – remembering words from a list – the less-active and sedentary seniors showed the equivalent of 10 extra years of brain aging when compared to those who had regularly done high-intensity exercise.

These results match closely with another study that was conducted six years earlier (2010) by researchers at the University of Pittsburgh. Except this time, the scientists measured brain shrinkage and memory loss, which usually occur as we age. In the study, 299 dementia-free people were asked to record the number of blocks they walked in a single week. Nine years later, the group members underwent brain scans to measure their brain sizes. After four more years, they were tested again to determine whether they had developed cognitive impairment or dementia. The study found that people who walked roughly six to nine miles per week had more gray matter nine years later and were less affected by dementia.

WHAT TO DO? Take advantage of this insight, and GET UP AND MOVE! Sitting still for long periods is the worst, according to the research. However, it’s a good idea to always check with your SoFHA physician before starting any new exercise regimen. U.S. government guidelines recommend that Americans get at least 2 hours and 30 minutes of moderate-intensity aerobic activity weekly to maintain good health. Doing more, of course, is even better for you. The best workouts are those that get your heart rate up. For more information, go to the Physical Activity and Health page provided by the Centers for Disease Control and Prevention.