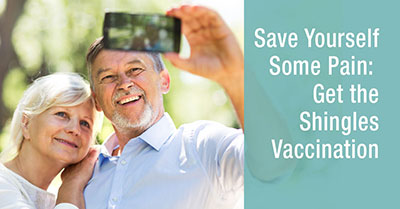 In 2008, the folks who advise Americans about vaccinations, the Advisory Committee on Immunization Practices, added another shot to the must-have list of immunizations for older adults.

If you’re age 60 or older, SoFHA’s physicians agree you should get a one-time shot of the shingles vaccine – in addition to having a flu shot annually, the pneumococcal pneumonia vaccine at age 65, and a Td (tetanus, diphtheria) booster every 10 years. (You should get the tetanus, diphtheria, whooping cough or Tdap shot once, if not acquired in childhood.)

Why is it so important for older adults to get the vaccine?  Because the infection occurs so frequently in this age group; it’s also unbelievably painful and uncomfortable, according to patient reports. Some people say the pain is so excruciating it’s comparable to giving birth or having kidney stones. Unfortunately, having such intense pain over a long period – shingles usually lasts from two to four weeks – can also lead to other issues, such as depression, anxiety and loss of appetite.

People ages 60 and older are more likely to get shingles due to having weaker immune systems. According to the Centers for Disease Control and Prevention, about one in every three older adults (60 years and older) will get the condition, which appears on the skin as a blistering rash. Shingles develops when the dormant chickenpox virus, varicella-zoster, gets reactivated in a person’s nerve tissues. No one really knows why or how this occurs; however, anyone who has ever had chickenpox is susceptible. (Notably, studies show that about 99 percent of Americans ages 40 and older have had chickenpox, even if they don’t recall the experience.)

Below are other key points to know about shingles and its protective vaccine:

Talk with your SoFHA physician as soon as possible if you’re in the 60-and-older age group and haven’t yet received your one-time shingles vaccination.

Want to know more? Read “Shingles Vaccination: What Everyone Should Know” posted on the Centers for Disease Control and Prevention website.